Stand Up
Speak Out
Push Back

HeartBeatsHate exists as an antidote to hatred. We stand in radical defiance of racism and bigotry. We’re here to help others learn a better way. We're building a brighter future for all. And we’re doing it with one simple message: love. Because love is greater than hate. And only HeartBeatsHate.

Our cities, towns, schools, workplaces and homes have a dirty secret: hatred. It used to lurk in the shadows, scurrying about in fear of being found out. But, in the past few years, it has become emboldened - taking adventurous steps out into the light. Spurred on by the hateful speech of people in power, it appears to be growing louder. Its bad behaviours are being encouraged. Sometimes, it still puts on a costume to suit the situation. Racism. Sexism. Bigotry. Homophobia. In the end, it’s all the same thing: hatred. And here’s the thing, despite the masks of courage and anger it wears, it’s a coward. It knows it can’t exist if it’s not passed on; if others don’t teach it and share its ways. 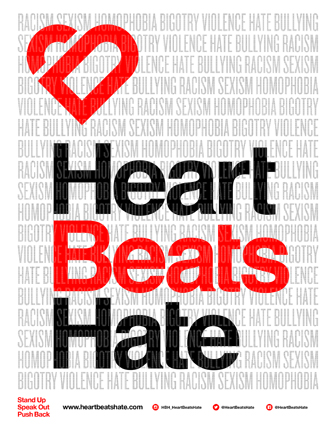 If not now, when?

We know we can’t wait for others to do this work. It’s up to us to be allies. Together we will confidently and peacefully, look hatred in the eye and shut it down. For good. Because together, we’re stronger than hate.

We believe hate is a choice. To radically oppose hate we choose heart. Our aim is to encourage, engage and equip others to choose heart too. Our membership is open to all. We have no organized religious affiliation and are non-political.

We’re a collection of individuals who believe that together we can triumph over hate in all its forms to make our homes, schools, communities, and the world better.

Changemakers. Students. Teachers. Parents. Sisters and brothers. Visionaries. Activists. Community builders. We are a diverse group of individuals from all parts of the world working together to stand up, speak out and push back against hate.

Who is HeartBeatsHate?
You are, if you want to be

We would be even stronger if we had you on board. We have no weird initiation rites and membership is free. What does it take? All you have to do is choose heart. Join us.

Wondering where and how to start? The best place is with you. Think of small acts of kindness and acceptance you can do each and every day. And then do them. These actions tell the world that you choose heart.

If you’re still looking for ideas or something bigger, check out our Learn Page, where we’ve got lessons for a variety of age groups.

How to choose heart everyday

Don't be a troll

Don't jump on the negative comment bandwagon. Be part of the solution by speaking and spreading more heart and kindness.

Get to know someone new. If you see someone sitting by themselves at lunch, ask to join them. Showing kindness doesn't have to be a big gesture.

Stay informed and up-to-date with what's happening in the world, and engage with it. Ask others how you can be an ally.

Say something nice to someone every day. We all need a little love.

Ask other groups what you can do to help them, don't swoop in with all the answers. Listening is the first step in being a good ally.

If you hear a racist, sexist, or homophobic comment, tell the person that's not appropriate. Choose your side, and stand it.

Wondering where and how to start? The best place is with you. Think of small acts of kindness and acceptance you can do each and every day. These steps tell the world that you choose heart.

SLAM DUNK THE STIGMA AROUND DISABILITIES WITH THE TITANS